On the northern tip of Warnbro Sound is Penguin Island and to the very south is Long Point. Both these extremities of are great fishing locations in their own right. Running between these points are a series of reefs which are part of the Murray Reef system and a few small islands known as The Sisters. 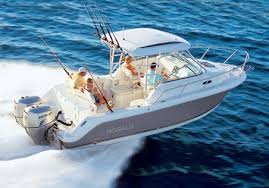 Almost halfway along this chain of reef and islands is a relativity deep channel, which acts as a highway for fish entering and leaving the Sound. Entering from this channel we see deep water up to 18 metres deep fan out and stay relatively flat until the shoreline is almost reached.

The deep water rises up very sharply onto one of the best beaches in Perth. The beaches near Long Point and Penguin Island aren’t blessed with this deep water nearby, but have sand flats and are interspersed with weed patches.

Heading out through the deep channel it’s only a few kilometres to the Five fathom Bank and one of the best salmon spots in Perth, Coventry Reef. Out past the Five Fathom Bank the fishing can be quite diverse and extremely productive at times.

When the swell is low, fishing on the bank or its edges can produce some top class fishing with snapper, king george whiting, skippy, dhufish, breaksea cod and samsonfish all likely to be found on sand, reef and rubble bottoms.